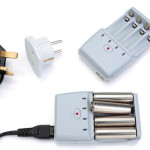 Like many people, you are probably concerned about your impact on the environment. Through the use of green technology, it’s possible to use a lot less energy. By using less energy, you can reduce the impact that you have on the environment. An obvious example of this is turning off lights and devices when they’re not needed. What about all those gadgets that run off of batteries, though? Just because they don’t run off of electricity doesn’t mean they’re not having impacts of their own. By choosing your batteries wisely, you can keep things powered up while doing your part to create a greener planet.
Disposable Batteries

For a long time, disposable batteries were the only real option for things like TV remotes and other gadgets and small appliances. When this type of battery runs out of power, it’s rendered useless. Your first instinct may be to toss it in the trash, but doing that only adds to the problem of filling up local landfills. Some batteries contain heavy metals that cause even more damage to the environment, an important thing to keep in mind when you find yourself with old, worn-out batteries.

Are Rechargeable Batteries Worth the Expense?

You may be reluctant to buy rechargeable batteries because they cost more upfront than disposable ones. That’s often the case with any type of green technology, but it’s important to consider the long term. You may pay more initially, but rechargeable batteries will last a lot longer. You’ll make up the extra money that you spent quickly. What’s even better is that you will be doing a small but important thing to help the environment. You may have to pay something of a premium for eco-friendly rechargeable batteries, but you’re sure to find it’s worth it in the end.

Take Care when Disposing of All Batteries

Batteries today contain far less mercury than they did in the past, so they are technically not as dangerous for the environment. Still, trace amounts of heavy metals like lithium, cadmium and silver can be found in some disposable batteries. Rechargeable batteries aren’t off the hook here, either as sometimes they can contain a lot of cadmium. If you’re concerned about protecting the environment, make a point of bringing all used batteries to a battery recycling station.

In the long run, as long as you’re willing and able to pay a little more upfront, rechargeable batteries are the way to go. They are greener than disposable batteries and have the added bonus of lasting a lot longer as well.