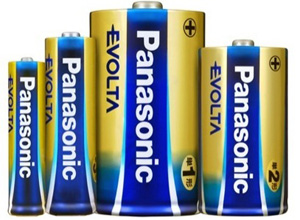 Officially certified, Guinness Book of World Records announced that Panasonic’s Evolta was the longest lasting battery. The title was declared on January 15 when a small robot climbed the Grand Canyon, a whopping 1738 ft in just 6hrs and 46 min.

The batteries are claimed to outlast Duracell and Energizer and keep your gadgets running 20% longer. What a relief that will be when you can get through a day without having to replace the batteries in your digital camera. Nothing ruins the moment like a blank screen for the once in a life time shot.

The batteries are scheduled to be released in mid April, hit the US in the later part of the year and will cost roughly $5.40 per 4pk. Until then there Panasonic’s Oxyride which up until now has been there super star.