Amazon Delivery in Under 30 Minutes - Is It Possible? 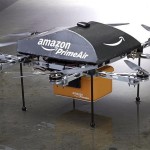 When you make a purchase from Amazon, you have a variety of shipping choices. Some orders qualify you for free shipping, or you can select between standard shipping and expedited shipping. These choices have been around for years, but you may have another more appealing option in the near future. How does receiving your order in just a half hour or less sound?

It may sound unrealistic, but Amazon’s CEO, Jeff Bezos, recently went public with the company’s plan to use drones in order to speed up the delivery process. Drones, also known as Unmanned Aerial Vehicles (UAV), look like small planes and are designed to fly via direction from a remote pilot or pre-programmed routes.

Current Use of Drones

To date, drones have been used by the United States military to conduct surveillance and reconnaissance missions in foreign countries. Some drones have been outfitted with bombs or missiles to carry out more lethal missions as well. There has been considerable debate over the use of drones for military purposes within the U.S.

When drones are sent into the battlefield, there is no concern about sacrificing human lives if something goes wrong. Drones can stay in the air much longer than other types of aircraft, and there is no pilot or passenger to suffer in the event of a crash.

The Future of Drones

Most Americans have heard about drones because they have made some appearances in the media. Many people do not fully understand what they are or why they are used, but that could change very soon. Just as you are used to walking out your front door and seeing the mailman deliver the daily mail in your neighborhood, it could one day seem ordinary to walk out the front door and see a small, unmanned vehicle dropping from the air to deliver a package. Amazon plans to call this service Prime Air.

All new technology becomes cheaper with time, and that is exactly what is happening with the technology behind drone production and operations. Prices are dropping, and that is opening doors for businesses like Amazon to purchase drones and brand them for their own use.

According to Bezos, Amazon expects Prime Air drones to hit the air in as few as four years. The FAA currently prohibits companies from using drones in order to turn a profit, but that is expected to change in approximately 2015. In order for companies to use drones for profitable operations, the FAA will need to establish rules that ensure the safety of consumers and fairness within the marketplace.

Once the laws regarding commercial use of drones are established and Prime Air is launched as an official shipping option, Amazon will fire up the engines as soon as customers submit and pay for their orders. It is expected that drones will deliver packages to many customers within a half hour, starting from the moment the order is placed.

Imagine ordering a new book and hearing the thump of the package on your front porch before you have time to brew a pot of coffee. Imagine ordering Christmas gifts for your children on Christmas Eve and having them delivered before the little ones wake up in the morning. Amazon believes this is the wave of the future, so brace yourself for the fastest shipping options ever to hit the consumer market.

One thought on “Amazon Delivery in Under 30 Minutes - Is It Possible?”