Do It Yourself APC RBC7 Battery Backup Rebuild 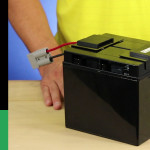 In today’s world you would be hard pressed to find a computer system, audio system or any other electronics without a battery backup. They are essential to protecting valuable electronics and even more valuable information they hold. Without one, in a moments notice all of your computer’s storage could become corrupted from a power surge, frying all your pictures, movie, music and or work. Yet this whole scenario could be avoided be simply owning and maintaining a battery backup.

While there are many brands out there, APC or American Power Conversion stands out as a popular and reliable choice for many consumers. I am going to walk you through how to rebuild one of their popular battery models, RBC7, while all the long saving you money. The RBC7 battery pack is used in many units such as BP1400 series, DLA1500 series, SMT1500 series, SU1000XL series,  SU1400 series, SU700XL series and more to name a few.

Getting Started Rebuilding the APC RBC7

If you get lost or unsure what to do you could always just watch the video presented by BatteriesInAFlash. A DIY video on how to rebuild an APC RBC7 battery pack.