A Beginner’s Guide to Solar Power and the Kitchen Sink

With summer coming to a close, many people are biting their nails over the electric bill because of all the A/C used on those sweltering days.  Maybe you’ve considered solar power as an alternative before and were overwhelmed by all the components required to actually set up a system.  Where does someone even get started setting up for solar? 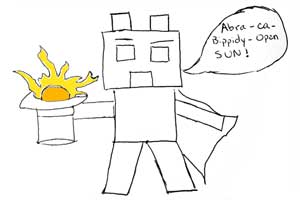 The science of it may seem complicated at first: photovoltaic arrays, AC-DC inverters, photons, etc.  When you think about it in terms of everyday life, though,  it’s actually quite simple.  Everything starts with the sun, which produces light and heat, and that is turned into electricity.  Lightbulbs function with the same concept reversed.  Electricity causes microscopic particles (known as photons) to escape the atoms and bounce around, which produces light and heat.  A solar panel works in the other way, catching these escaped photons that come from the sun, which creates electricity.

This electricity isn’t the kind that can be used in a home, however.  Just like you cannot plug a microwave directly into a bolt of lightning.  That is why a power inverter is required.  An inverter changes power from DC or Direct Current (like a lightning bolt that only goes one direction), into AC or Alternating Current, which can be used by appliances and electronics.  Thus the term photovoltaic or PV, which comes from the two words photo, from the Greek word for light, and voltaic, “pertaining to electricity” (dictionary.com).

That is all great and peachy as long as the sun is shining.  But what happens when night falls and you still need electricity?  All solar powered systems require a battery.   This is much like harvesting a whole field of wheat.  It is way too much to be eaten all at once, so you put it in storage to eat during winter when food won’t grow.  With a battery hooked up to a solar panel, the electricity “caught” throughout a sunny day can be stored up for use at a later time, when it’s cloudy or dark.   (As Shane pointed out below, this only refers to solar power that is not connected to the electrical grid, known as off-grid).

Sometimes more equipment may also be needed.  Racking and mounts hold the solar panel in place, since you can’t just plop it in your backyard and expect great results.  Monitoring equipment and other accessories add greater efficiency to your system but may not be necessary. 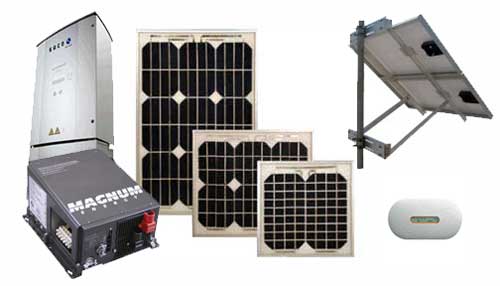 This summer we went camping down in a canyon with no electricity available but brought along with us a six-inch lantern powered by the sun so we could play cards after dark.  It was a hit with everyone, and even other campers were asking about it.  Solar starts small, just like every big change.  They make tiny photovoltaic panels (with the battery already included) that can fit in the palm of your hand specifically to charge phones and other small devices.  Even emergency equipment now comes with solar power, like NOAA weather alert radios, flashlights and more.  We talk about some clever ideas for using solar power in one of our previous posts:

Telephones alongside remote highways that can be used to call 911 are now hooked up to solar panels about 2 feet across.  This is a medium size that is often used on recreational vehicles and boats to power a few small appliances.  Larger ones may require more research or expertise to install, but they are well worth the cost savings.  For more details, check out these answers to 10 frequently asked questions by one of our suppliers.