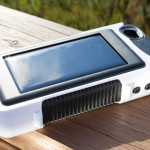 Today’s smartphones are decreasing the need for people to own multiple gadgets since modern-day phones offer the features of an alarm clock, music player, GPS unit and much more. Despite the ever-advancing technology supplied by smartphones, battery longevity still remains a problem. Fortunately, smartphone developers are toying with a variety of concepts to address this issue, one highly anticipated idea being utilizing solar energy for power.

A few years ago, several cellphone companies developed mobile devices with solar cells installed on the back of the unit. The solar phones were the Samsung Crest and the Sharp Solar Hybrid. With the technology, the mobile devices were able to use solar power to operate. However, the advancement faced a major setback; the location of the solar cells. With the equipment installed on the back of the cellphone, users had to place their phones face down on a flat surface for the cells to collect solar power. When the phone was face down, the mobile device’s owner was unable to see his or her messages and notifications as easily. As a result, the phone style was unpopular, and manufacturers ceased making it.

Currently, most mobile devices use lithium-ion batteries as a power source. However, exciting innovations from SunPartner Group include the development of a way to connect a solar-powered smartphone display screen to the unit. With the technology on the front of the smartphone, people will be able to efficiently use the device while it’s collecting power from the sun.

Instead of creating an overlay made entirely from transparent solar cells, SunPartner has created the mechanism by alternating thin-film solar cells with regular transparent film. Furthermore, the company has been able to prevent the overlay from displaying a striped appearance by using small lenses that thrust the image from below the dense solar cells. The construction method spreads an image across the full screen. The lenses can also guide the sun’s rays directly to the device’s solar cells. Currently, SunPartner’s trial screens are approximately 82 percent transparent, and the company foresees its future screens becoming 90 percent transparent.

Smartphones with solar technology will continue to use a wall charger to acquire power, but the solar addition will extend the life of the device’s battery during normal use. Also, the technology advancement will provide power to the phone when it’s idling in the sun. According to The News Tribe, Apple and Samsung will also be releasing smartphones that feature solar power technology in the future.

The added technology is economical as it only adds about $2.30 to the cost of a phone. Furthermore, technology experts report that when people use a mobile device’s solar power properly, they’ll increase the lifespan of their smartphone by an estimated 20 percent.

The Benefits of Solar-Powered Mobile Devices

By shifting to solar power, smartphone manufacturers are offering consumers a product that is better for the planet since it lasts longer and uses less energy produced by fossil fuel. In addition, the technology results in less consumer frustration as the sun’s energy will help maintain the power of the smartphone’s battery – a win-win for all.