Wagan Tech inc has come out with a range of very conveniently sized (pocket-able) solar chargers for consumer electronics. They will charge batteries, iPods, digital cameras etc, all from the sun. The units themselves are very lightweight and come in two distinct types. 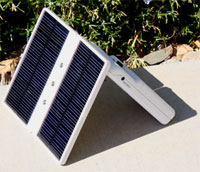 The Solar e Power unit will also charge 4 AA or AAA batteries, which could be handy as it can also use those same batteries to power or charge anything you plug into it.

There is a selector switch on the back that allows you to switch between three modes:

Also the charger will handle either NiCD or NiMH. Power from the device is delivered through either a 5V plug on the side (there are multiple connectors included) or via a USB outlet. Wagan Techs’ Solar e Power Charger sells for $49.95.

The next model up is the creatively named Solar e Power II, which has a little more solar surface area (each solar panel measures about 7” across). The Solar e Power II also comes with its own 2000 mAh Li-ion internal battery. This allows you to charge the unit up in the sun and then close it up and use it as a normal external power source.

It comes with 5 adapters for your phones and devices, the standard USB sizes (micro, mini) as well as more specialized ones for iPods and the like. Also included in the pack is a car and AC power supply for non solar charging.

The unit itself has a couple of USB outputs and the 5v phone charging port. Also it has a small LED flashlight on one end.

As a whole the Solar e Power II seems to be fairly sturdily constructed and fairly functional, it pays to read the instructions as there are a few different indicators that you need to be familiar with.
The Solar e Power II from Wagan Tech sells for $89.95