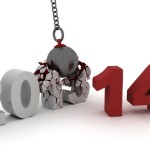 These days, technology moves at rapid speed. It seems that as soon as we begin to wrap our head around one innovation, a new one is already out on the market. With our recent overview of 2013’s technologies, we decided to put together our predictions for what we might expect to see in technology of the New Year.

Thanks to Tesla, 2013 was the year that people really started to look at electric cars as viable alternatives to gas-powered vehicles. Expect electric vehicles to continue their meteoric rise in 2014. Elon Musk has already predicted electric vehicles that can travel 500 miles on a single charge within the next few years. For our 2014 technology predictions, we expect electric cars will continue to drop in price, and base models will near $20,000.

Apple, Samsung, and other smartphone companies all release new smartphone models every year, but the latest iPhone and Galaxy S models won’t sell more units than in 2013. The PC industry has slowed down in recent years because most consumers have all the hardware they need to browse the Internet, send emails, and keep in touch with friends on social media. Smartphones have delivered a similar experience since the original iPhone was released in 2007. Without a revolutionary change in function or speed, consumers will increasingly find themselves content with last year’s model.

More than 34 percent of all people in the world now access the Internet. In the past 10 years alone, we’ve seen the rise of social media, cloud computing, and media streaming. There’s more data than ever passing through the Internet, and big data is so large and complex that it’s often indecipherable to the unaided eye. It’s been used by large corporations, governments, and even President Obama’s reelection campaign. Big data is here to stay, so companies are developing software to interpret the data with visual charts and graphs.

Unlike the iPod, which revolutionized how we listen to music, smartwatches won’t do anything new. Consumers can already access email and text messages from their phones. Clocks, calendars, and other apps are all available at the press of a button. However, smartwatches will still take off in 2014 because they’re stylish and relatively affordable. Samsung managed to beat expectations with the Galaxy Gear smartwatch, which sold 800,000 units in just two months. A smartwatch is more convenient than a smartphone so many consumers will make the leap even though they can perform the same tasks on their phones.

Edward Snowden managed to completely change the face of the Internet by releasing details about the NSA’s extensive surveillance program. The global outcry was immediate, and many governments threatened to develop their own networks instead of relying on the current Internet, which the U.S. maintains. Tech giants like Google and Microsoft have promised to begin encrypting data. While the average consumer won’t be able to tell much of a difference, encryption will make the Internet more secure against identity theft and other online crime.

One thought on “Top Technology Predictions for 2014”