Solar Power Comes In Many Forms and Functions 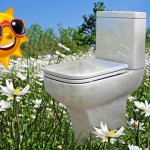 Solar panels may get all the press when it comes to solar technologies, but scientists are coming up with other novel ways to harness sunlight. The following solar gadgets use nothing but the sun for power:

Most solar panels are over a square meter in size, and they can weigh up to 35 kilograms. They are anything but portable, but scientists have been shrinking them down and making them more efficient. Now, consumers can charge their electronics while on the go. A variety of portable chargers are now available, the most powerful of which can generate up to 15 watts of electricity in full sunlight. That’s enough to fully charge a phone or laptop battery within a few hours.

Often times it can be easy to forget that not everyone has access to adequate plumbing. Millions of people still use latrines, and many lack even the most rudimentary sanitation. How can humanitarian organizations possibly provide toilets to millions of people? Until a few years ago, such a project would have required millions of dollars in new infrastructure and decades to complete. However, thanks to the Gates Foundation, that dream is about to become a reality. By harnessing sunlight, these toilets reuse the same water over and over, eliminating the need for plumbing. Solid waste can be turned into fertilizer, and the toilets can even produce hydrogen as a separate fuel source.

A strong hurricane or natural disaster can knock out electricity to towns for weeks or even months. If this happens, many people would be left unable to cook food and provide meals for their families. Fortunately, emergency solar cookers can be used to cook meat and boil water. These inexpensive devices use solar energy to heat up cooking pots, and can be set up in seconds.

Trash cans help keep cities clean by allowing residents to conveniently dispose of waste. Photovoltaic trash cans  have the added benefit of helping the environment by compacting garbage using solar energy. When these solar trash cans fill up, they alert local waste management companies so that they can be emptied out. By using these trash cans, cities stand to save thousands of dollars a year while also cutting down on CO2 emissions from garbage trucks.

One glaring problem for solar panels is their appearance. They take up space on rooftops, and they look even worse when installed in yards. Fortunately, homeowners will soon be able to install photovoltaic film on their window panes. While less efficient than traditional panels, film doesn’t take up any additional space. It’s essentially invisible, and installation costs should be negligible compared to traditional panels.