Smartphones of the Future: The Technology We Want 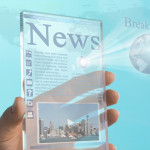 It might seem ungrateful to look around at the smartphones of today and wonder what’s coming next, but there’s no doubt that tomorrow’s innovations will make today’s technology look primitive. One need only look at history to understand this. Twenty years ago, the majority of people didn’t even have a home computer. Today, most Americans walk around with one in their pockets. Seeing as how technology increases at an ever-expanding rate of speed, it’s impossible not to wonder what might be around the corner. Here are some of the innovations we will hopefully see in the near future.

Do you remember watching a movie like Terminator 2 for the first time and imagining how cool it would be to have a computer that would analyze your surroundings? Against all odds, that is almost certainly the future. Google Glass is one of the first major innovations in this area, overlaying the user’s usual experiences with references, instant lookup, a camera, and direct voice command. According to the latest forecasts, more than 200 million people will be using augmented reality by the year 2018.

Voice controlled devices have been around for a long time, but it is only recently that the technology became anything more than a distracting novelty. Apple’s Siri voice control changed the way many thought of the system. That said, it’s still far from perfect. Expect the future to see vast improvements in voice control, possibly eliminating the need to ever tap a screen or punch a keyboard to get the results you want.

When people complain about their smartphones, the complaints often center around the battery life. The more things these devices are capable of, the faster they run down their batteries. This might be fine if it took only an hour or so to recharge, but some phones take three or four hours to reach a full battery bar. This will almost certainly change in the future, according to insiders at Sony. Not only will tomorrow’s smartphone be able to quickly recharge, it will be able to do so wirelessly. (But we are still keeping our fingers crossed for a phone that hosts battery life to last us through an entire day!)

Broadcasting to the World

Most people today have a Facebook account, a blog, a Twitter account, or some other way they interact with friends and strangers online. Tomorrow’s smartphones may be able to take this communication to the next level. After all, according to many industry giants, privacy is already becoming a thing of the past. By setting the right preferences in your phone, you could be able to broadcast the information you want people to know. All they’ll need to do is point their phone towards you to pick up those vibes you’re sending out. Not only could this radically change how people meet and interact, it could make finding a date in the future quite a bit more interesting.