Nissan Takes Electric Cars to the Next Level 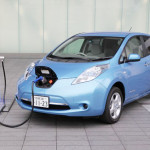 The Nissan Leaf hit the world’s marketplace in late 2010, quickly becoming the world’s bestselling electric car. A hatchback, the Leaf has grown to become one of the most fuel-efficient cars on the planet. The EPA estimates the range of the Leaf at a robust 73 miles, with a fuel economy of 115 miles per gasoline gallon equivalent. Nissan, however, has decided that this is just the tip of the iceberg when it comes to the capabilities of their electric cars. In what would have seemed like science fiction not long ago, the company is developing a new system that will let companies draw power from their employees’ cars instead of working off the grid.

Can a car really power a building? According to Nissan, it’s not only possible, it’s inevitable. Their vehicle-to-building technology will allow up to six of the electric cars to be plugged into a building’s electricity distribution board. Once hooked into the system, the cars and the building essentially feed off each other. At peak usage hours, the building can switch from the city’s electrical grid, pulling the power it needs from the electric cars hooked into the system. When the peak hours are over and electricity prices fall, the system reverses, and the cars draw power back from the building. It’s a remarkable new frontier for electrical engineering, and it could prove to be an immense boost for the electric car market.

Of course, the first thing anyone would ask is whether the building’s power demands would ever leave unfortunate employees stuck without a ride. Nissan is adamant, however, that this scenario will not occur. They claim that the vehicle-to-building system is designed to charge each Nissan Leaf fully before it’s time for their owners to drive them home.

So, is this kind of technology a pipe dream, or can it really work in a practical environment? As it happens, it is already being used in at least a couple of locations. Nissan has been conducting field tests of their system at the Advanced Technology Center in Japan since the summer. Nissan claims that the Center was able to reduce their grid usage by 25.6 kW by working with the vehicle-to-building system. Additionally, a pilot program at the University of Delaware demonstrated this year that creating a mini-power plant is possible with the use of electric cars.

Though the notion of vehicle-to-building technology may seem exciting, some industry pessimists claim that it will be a long time before this system has a substantial impact on the energy economy. A recent report by Navigant Research claims that these systems have added less than 9 worldwide megawatts to electrical capacity as of 2013. Although the report projects worldwide vehicle-to-grid revenue to reach nearly $200 million by 2022, that’s still just a drop in the ocean compared to the earth’s power consumption. For the time being, though, maybe it’s enough to marvel at the innovation and wonder where this kind of technology will take us next.