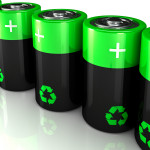 Renewable energy has become a hot topic in the last few years as more people understand how finite natural resources really are. While there are currently many sources of renewable energy, there are some major issues that keep them from becoming more popular. A Harvard team of researchers has recently discovered a new way to create batteries that could not only improve current renewable energy sources, but make them much cheaper.

The major problem with most of today’s renewable energy sources is that they don’t produce energy if the sun isn’t shining or the wind is still. This means that the batteries can only produce and hold so much power, which makes it difficult to use renewable energy during the winter, night or certain areas with little sun or wind.

In addition, the batteries that hold this energy are very limited and quite expensive. As a result, most batteries use metal to hold their charge; the two most common being nickel and lithium.

A team of researchers has recently discovered a way to improve these batteries while making them cheaper. While the results are just preliminary and the battery isn’t yet being produced, the findings are astounding.

Instead of using metal, the researchers are using a certain type of carbon found in crude oil. This carbon, known as quinone, is capable of holding two electrical charges per molecule, which makes it much better than lithium and nickel because they can only hold one electrical charge per molecule. This literally doubles the amount of electricity that can be stored without increasing the size of the battery.

Another benefit is that the carbon is easier and cheaper to harvest. This can decrease the price of similarly sized batteries, even though they can hold more power.

This team of researchers has received a fair amount of funding for this battery and improved ones. They received about $590,000 to make the battery in a year, however there is talk about extending the contract to three years for $3.75 million.

While the Harvard researchers are elated about what they discovered, they just consider this the tip of the iceberg. There are many other carbon molecules with similar properties found in crude oil, and some of them might be able to hold even more power that the quinone molecule.

They are also considering commercializing the battery for people who use renewable energy sources. They are thinking about a battery that’s the size of a trailer that homeowners and businesses could use to store energy during the night. While there are risks to this technology if it doesn’t work as planned with a commercial venture, many people are excited about this new type of battery.

Many people have embraced renewable power, but it still has many problems in terms of collecting and storing energy. While this new advancement won’t entirely correct these issues, it will make it much easier to store all of that energy from the sun and wind.