How does the Droid stack up?

One of the more popular items for the holiday season this year will no doubt be the smartphone. Probably the most well known example of this is the iPhone 3G, the Motorola Droid is a fairly recent comer to the scene and has some very nice features.

The advertising campaign Verizon put out to compliment the launch of the Droid was fairly direct and made some less than flattering comparisons between its own 3G network and that of AT&T, the iPhone carrier network. I can attest to the AT&T network being less than stellar in a lot of respects, the dropped calls and spotty 3G coverage are widely known. 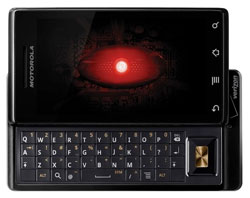 The Droid of course can’t compare to the sleekness of the iPhone styling. With its sharp corners and slightly blocky appearance it doesn’t have the inherent grace that Apple imparts to its products. Though not hideous by any means, it does lack a certain something and occasionally the default screen image can seem a little ominous.

If the Droids’ design seems a little utilitarian and “boxy” the screen makes up for it. The Motorola Droid sports a brilliantly crisp 3.7” (the iPhone is 3.5”) WVGA display that does very well at delivering video and graphic content. Displaying up to 16 million hues at a resolution of 854×480 (16:9 widescreen) it displays those HD YouTube videos really well (though there’s still no Hulu support).

The keyboard on the droid takes a little getting used to. The keys are all mounted flush against each other and have very little actual tactile feedback. They’re slick and don’t go down very far when pressed which can make typing by touch a problem.

Eventually though you do get used to it, also there’s a sometimes useful directional pad on the keyboard. My fervent hope is that there will be some games that make decent use of this at some point.

The Apple Store has well over 100,000 apps for the iPhone, that’s a staggering number of applications and definitely gives credence to the “There’s an app for that” saying that Apple has been using to help market the iPhone.

The Android app store is up to around 10,000 entries. This is bound to increase as Google has taken pains to promote the “open” nature of their platform which allows developers more freedom when creating their applications. This may possibly be to the detriment of the app store as it’s definitely possible that a flood of low quality apps will surface. Time will tell. But at the moment it’s a safe bet that there’s probably an Android app for that too!

Also you may have heard about the GPS service that Google has launched. It’s FREE and works in with Google Maps to provide you with turn by turn directions. It’s just an app so while for the moment it’s only for Android it is definitely coming to iPhones in the not too distant future. This free service is going to play havoc with subscription based GPS (and it’s cool to get turn by turn on streetview).

Though of course you can only run one of those 70,000 apps at a time on the iPhone, so no checking Yelp while you’re streaming Pandora and emailing a friend about dinner plans. That’s a bigger deal than you might realize until you’ve gotten used to doing it I have to say. Background applications are a fabulous thing!

The Droid you’re looking for?

Overall the differences between the two phones aren’t that huge. They’re close enough that some of the deciding factors may be more to do with the service than the phones. The better call quality and somewhat negative public perception of AT&T’s service (possibly helped along by Verizon’s ad campaigns) might be a deciding factor in some people’s choice.

One hint though, if you’re looking to do some more research, avoid forums like the plague, fanboys are rabid and abundant on both sides!

4 thoughts on “How does the Droid stack up?”