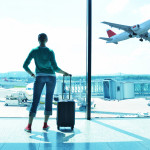 If you’ve flown in the past year or two, you may have noticed that one of the new airline safety warnings many airlines are issuing concern over is the presence of lithium ion batteries. Numerous airlines instruct passengers not to leave loose lithium batteries in their luggage. So, just how much of an airline safety threat are these types of batteries and why the recent increase in concern over them?

How much of a threat are lithium batteries?

Fortunately, there isn’t much to worry with while using these batteries at home. Nevertheless, a couple factors relating to flying exacerbate the problem and make them a major airline safety issue. One concern is that loose batteries rolling around in luggage can make contact with other metal objects and start to discharge. For instance, a fire in one man’s luggage last year started when a loose battery accidentally made contact with a screwdriver. Loose batteries can also come in contact with each other and short circuit.

Another factor in airline battery fires is the high altitude and low pressure. Well-made, brand name batteries don’t pose much of a risk, but cheap off-brand batteries have had a variety of instances of small explosions. Airlines recommend passengers travel only with brand name batteries from known manufacturers. By packing batteries in their carry-on luggage, passengers can ensure that their batteries stay pressurized. Some aircrafts pressurize the baggage compartment and others don’t, so it’s safer to keep batteries in the carry-on luggage in the pressurized area of an airplane.

Taking basic measures to pack well can ensure you don’t fall victim to battery problems. Airlines and governments are working to inform passengers of the potential airline safety risks of loose batteries. Banning lithium batteries would be extremely inconvenient, and probably an impossible solution to resolve battery fire concern. It’s also worth noting that although several instances of battery fires have been reported, these represent only a tiny sample of flights, and make up less than one in a million batteries that will catch fire or explode. Yet, one airplane fire that gets out of hand could be disastrous, so it’s best to invest in prevention early on. Due to the impracticality of banning batteries, the responsibility rests with each traveler to pack responsibly.

Rechargeable batteries enclosed in devices like a phone or tablet pose less of a threat than external batteries. Looking to the future, increased battery capacity in mobile devices could pose more of an airline safety threat as well. However, increases in efficiency and heat management should hopefully reduce this potential. It’s unclear what the long-term threat from batteries will be, but careful prevention now will preclude future problems.