10 Things You Didn't Know About LEDs 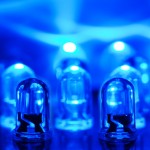 One of the biggest new trends in the world of home lighting is the transition from incandescent lights to energy-efficient, long-lasting LED bulbs. These light emitting diodes (LEDs) do come with a heftier price tag than other light bulb products, but if you take a look at some of the lesser known facts about this technology, you will soon discover that spending a few extra bucks might be very well worth it.

They’ve Been Around for a While

Incandescent bulbs came first, of course, but the light emitting diode still goes back half a century. The first practical LED lights were developed at General Electric in 1962. Since then, their efficiency and light output have doubled roughly every three years.

Because of their efficient technology, these bulbs can last tens of thousands of hours. Put another way, a bulb that’s lit for eight hours daily only will only need to be replaced every 17 years. This long lifespan is ideal for hard-to-reach fixtures where changing the bulb is especially difficult.

Light from an LED bulb is focused in a single direction. The classic use for this sort of lighting is in flashlights and similar appliances, but it’s also great for recessed fixtures that are designed to shine down rather than around an entire area.

Incandescent and fluorescent bulbs have breakable glass and fragile filaments. Because LEDs have no filaments or other breakable components, they can stand up to all sorts of abuse without losing functionality or needing to be replaced.

While incandescent and fluorescent bulbs tend to get hot during operation, LED bulbs produce very little heat. Besides making removing the bulbs a snap, this is great for lights that are easily accessible to small children, such as holiday decorations and lamps in playrooms.

They Have No Mercury

Unlike fluorescent bulbs, which contain hazardous chemicals, light emitting diodes are completely non-toxic. Even when they do need to be replaced, which isn’t often, they don’t require any special procedures for safe removal.

They Save Energy Two Ways

One of the greatest benefits of LED technology is reduced power usage for the same brightness as its less efficient counterparts, but that’s not the only benefit. These lights also produce less heat and UV radiation than fluorescent and incandescent light bulbs, which reduces the cooling load on your air conditioner or heat pump.

In 2012 alone, about 49 million of these advanced light bulbs were installed in buildings throughout the United States, leading to about $675 million in energy savings. As more homeowners become aware of the incredible savings available, that number is sure to continue to grow.

Incandescent and fluorescent lights are still a little easier to find than light emitting diodes, but LED bulbs are hardly difficult to get. Your local hardware store most likely carries at least one model; even if you can’t find them locally, they’re easy enough to order online.

Right now, the only real downside of light emitting diodes is the high up-front cost to upgrade from incandescent or fluorescent lighting. As more and more companies come to understand the power of this technology, though, those costs will continue to drop, and consumers will be able to save more than ever.